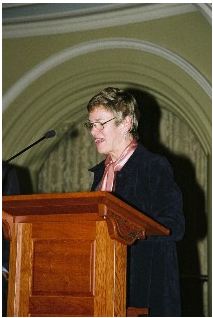 Gwendy Hall accepting the Gold Medal award at the 2005 IGES

Oral citation given by Gerry Govett at the IGES in Perth on September 27th 2005.

To do justice to Gwendy Hall's achievements would require at least a full session of this Symposium. As this is not possible, we have compiled this brief summary to give you just a taste, a flavour of her achievements.

All of us here have been influenced by our Gold Medal recipient and five Fellows of the Association - Rob Bowell, David Garnett, Barry Smee and me - under the leadership of Eion Cameron (who sadly is not with us tonight) - nominated Gwendy for the award.

We have all read her papers and have used her analytical methods. The journals that she has edited are found on our bookshelves and in our libraries. We have heard her speak at conferences, workshops and company meetings.

Gwendy has spent her career at the Geological Survey of Canada where she established a laboratory to develop analytical methods in exploration and environmental geochemistry. At first her laboratory served mainly the Applied Geochemistry group of the Survey. This work is reflected in the methods used for the National Geochemical Reconnaissance surveys, which have produced geochemical maps for resource and environmental purposes covering more than half of Canada.

Along the way, the GSC suffered substantial budget and staffing cutbacks. Does this sound familiar? But Gwendy went out and forged a series of alliances with mining companies, commercial laboratories, and instrument manufacturers to provide funding to expand the activities of the laboratory. This vigorous interaction with other organisations and scientists has been a hallmark of her career.

Her experience in ICP-Mass Spectrometry is unequalled, having helped test the prototype for the first commercial ICP-MS, manufactured by a Canadian company, Sciex. The ICP-MS formed the basis for a number of innovative developments, notably in selective leaches. A particular problem with these is that the elements, once dissolved, may reabsorb on to the matrix. In a series of papers she has defined this problem and proposed solutions. With commercial partners she has developed "designer" leaches that may be applied in exploration and environmental geochemistry where previous methods were found to be less effective.

The field of hydrogeochemistry has been enhanced by Gwendy's work. She has been particularly influential in developing sampling and preservation protocols that are now accepted internationally by environmental regulators. One of her most significant tasks resulted from an invitation from the Canadian Department of Foreign Affairs to develop geochemical methods to detect underground nuclear test explosions. There was a need to have robust methods to test for violations of the Comprehensive Test Ban Treaty.

The work, carried out in Nevada in collaboration with Barringer Research, was resoundingly successful with high contrast anomalies for volatile elements using selective leaches, whereas previous attempts using total digestions of the soil showed no anomalies.

Her output of publications is prodigious - 130 papers in refereed journals and books, 46 GSC publications and 64 papers in a variety of other publications, including Explore. She has been an editor of important special issues, most notably one on selective leaches in the Journal of Geochemical Exploration.

Gwendy has also given immense service to this Association. After serving as an Editor-in-Chief of the Journal of Geochemical Exploration, she undertook the difficult task of founding a new journal: "Geochemistry: Exploration, Environment, Analysis", now in its fifth year of publication.

Gwendy has also been President and long-time Treasurer of the AAG. Since the AAG office moved to Ottawa in 1995, she has supervised the working of the office.

These achievements were attained not solely by an astute scientific mind and hard work. Her friendly and generous character has permitted her to establish - and retain - strong working relationships with a remarkable range of scientists from many countries and different disciplines. The cooperative nature of her work may be gauged by the statistic that over the past 10 years no less than 120 persons have been co-authors of her papers.

I could not introduce a more popular or deserving winner of the Association's gold medal, Gwendy Hall.