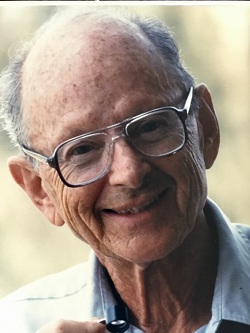 Harold Bloom, a founding member of the Association of Exploration Geochemists, died in Naples, Florida on January 24, 2001. Born in Brooklyn, NY in 1913, he was educated at Brooklyn College, where he earned a degree in chemistry in 1935.

Hal was employed as a cartographic technician by the U. S. Department of the Interior during World War II. Following the war he joined the U. S. Geological Survey’s fledgling Geochemical Exploration Section in Denver as an analytical chemist. It was there, in collaboration with Herb Hawkes, that he developed the ammonium citrate-soluble heavy metals test using the colorimetric reagent dithizone for the on-site analysis of soils and stream sediments – now popularly known as the “Bloom test.” This approach of determining “live” elements, as Hawkes called them – mobile elements dispersed during alteration or weathering of mineral deposits – was a forerunner of the partial extraction methods so widely and effectively used worldwide today.

Following this exploration venture, in 1955 Hal became professor of exploration geochemistry at the Colorado School of Mines. His keen sense of humor and dedication to students’ career preparation made his courses popular. As part of his program at Mines, Hal assumed teaching the geochemical exploration short course that had previously been run by the USGS at its Denver laboratories. Several summers he was assisted by Al Levinson, a long-time friend and professor of geochemistry at the University of Calgary. Many exploration geologists from industry gained their introduction to geochemical exploration techniques through this course. Portions of the course were also offered at the summer field course required of all Colorado School of Mines undergraduates.

During his tenure at Mines, Hal, along with two other Mines professors, served as a Fullbright lecturer and short course director in Australia the summer of 1967 under the sponsorship of professor Eric Rudd of the University of Adelaide. Rudd subsequently reported that the success of this program in 1967 was the inspiration that led to his being able to form the Australian Mineral Foundation. Following the Fullbright tour, Hal became a consultant to the United Nations, helping to establish geochemical exploration programs in Senegal, Nicaragua, Mexico, and Bolivia, and he consulted broadly with the mining industry. Hal retired from teaching in 1978, but maintained his contacts with the profession for many years. After retirement, he established a scholarship fund to assist students in exploration geochemistry.

In 1968, Hal teamed with Frank Canney and John Hansuld to organize the second geochemical exploration symposium, held at the Colorado School of Mines. He was co-editor of the proceedings of this symposium, published in January 1969 as Colorado School of Mines Quarterly vol. 64, no. 1, and he was a founding member of the Association of Exploration Geochemists, established as an outgrowth of this symposium, serving as a councillor from 1970 to 1972, and alternately as secretary or treasurer from 1972 to 1974. Hal also was a member of the Committee on Geochemical Analysis and served as the first chairman of the Research and Education Committee. In 1975 on behalf of the AEG, in collaboration with R. F. Horsnail and P. K. Theobald, he conducted a workshop on geochemical exploration for uranium – a hot commodity at the time.

Hal was a competitive tennis player once ranked no. 1 in his class in Florida. He reportedly relished moving into increasing age brackets, as his relative youth in each new bracket increased his competitive advantage. He is also remembered by former USGS colleagues as a formidable lunchtime horseshoe player.

He is survived by his wife, Betty, of Naples. Florida, a daughter, Lillian, and a host of friends and former professional associates. Memorial contributions may be made to the Harold and William E. Bloom Fund, Colorado School of Mines Foundation, 15th and Illinois Streets, Golden, CO 80401.