Current Status of Applied Geochemistry in Australia and New Zealand

Future mineral discoveries in Australia will most likely occur in the 80% of Australia that is covered by regolith (Figure 1).  Here, traditional exploration methods are not as effective as they are in outcrop areas. To address this exploration challenge an ambitious and integrated research program to enable Australia to uncover more of its mineral wealth has been proposed, and developed into the UNCOVER Initiative (Figure 2).

As part of this initiative, the Australian state geological surveys, Geoscience Australia, CSIRO, university geoscience programs and State and Commonwealth governments will work to the same vision and strategic plan. UNCOVER has a clear and simple agenda: to identify, develop, and deliver the science necessary to improve the success rate of mineral exploration in Australia under covered areas.

Although in its infancy, already a number of programs are feeding into this plan. For example, initiatives with the Deep Exploration Technologies CRC ($~18M p.a) undertaking research and development for rapid drilling through cover and real-time sampling analysis. The “Distal Footprints of Giant Ore Systems” is another major project ($~4M p.a.) between core partners CSIRO, UWA/CET, Curtin University, GSWA, MRIWA and SIEF to assess broad scale geological (geochemistry/isotopes/minerals/geophysics) signatures in the Capricorn Orogen of Western Australia. Other ARC geoscience Centres of Excellence (such as the Core to Crust Fluid Systems centre) have aligned their goals to the UNCOVER vision. Additionally, a roadmap exercise project is now officially under way with industry support as the AMIRA P1162 project to clearly identify industry problems and opportunities that can practically be achieved through collaborative research.

Initial implementation of UNCOVER included a comprehensive face-to-face and web-based survey of industry, the geological surveys and academia as well as a Summit held in Adelaide in early April, 2014. The summit brought together 150 delegates representing industry, academia, and government agencies from Australia and internationally.

Two additional components of UNCOVER are:

Further information on UNCOVER and can be found at https://www.science.org.au/publications/searching-deep-earth-vision-exploration-geoscience-australia

Or the UNCOVER Roadmap project P1162 on the AMIRA website http://www.amirainternational.com/ 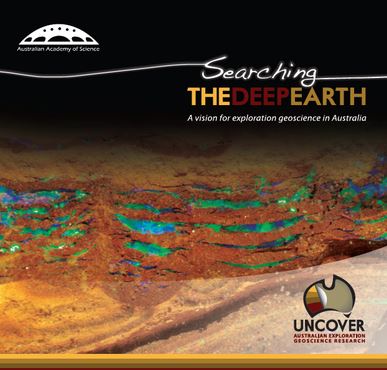 Figure 2. The intial booklet detailing the objective of UNCOVER.

Another exciting new development for geochemistry in Australia is the Advanced Resource Characterisation Facility (ARCF) that is a $9M p.a. investment into analytical equipment capable of delivering analysis from core to atom scale. The  infrastructure is funded by SIEF through UWA, Curtin University and CSIRO as partners for the National Resource Sciences Precinct in Perth,Western Australia. Preexisiting facilities will be merged with a new NanoSIMS, an Atom Probe TEM and the prototype Maia mapper. This hub for geochemical characterisation will be internationally unique for the range and proximity for access to these facilities (Figures 3 and 4). For more details see http://www.nrsp.com.au/ 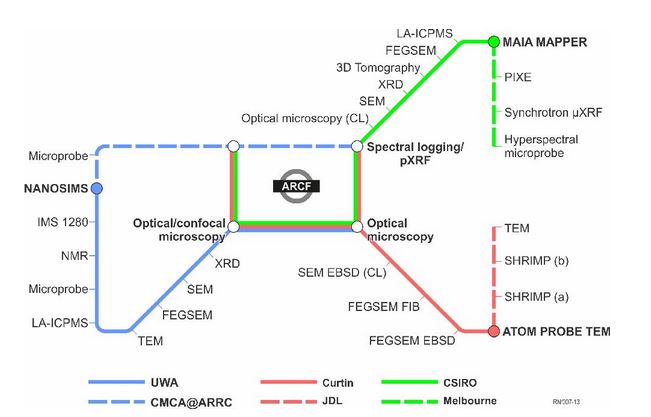 Figure 3. Equipment that will form the ARCF from the three core parties. Figure 4. Work flow for characterisation from the drill core to the atom scale that will be available as part of the ARCF.

GNS Science is undertaking a pilot regional soil geochemical survey in the southern part of the South Island to test methodologies and to provide data to help promote the concept of a national survey programme. Soil samples were collected at c. 400 sample sites spaced at 8 km centres across south Otago and Southland (Figure 5). At each site, c. 5 kg samples were taken from two depths, 0-20 cm (c. A soil horizon) and 50-70 cm (c. B soil horizon), using hand augers (Figure 6). They were dried and sieved to provide the < 2 mm fraction that was retained and split for analysis and an archive reference collection. Sampling and QAQC protocols and methods are described by Martin et al. (2014) and Rattenbury et al. (2014), and the samples are catalogued in the national rock and geoanalytical database (pet.gns.cri.nz). It is planned to analyse the samples for more than 60 elements by pXRF, XRF and partial digest ICP-MS, all by July 2015. Some samples will also be analysed for magnetic suseptibility and for sulphur, strontium and lead isotopic compositions. The results will be used to determine the optimal “cost-benefit” sampling density for a national survey and to demonstrate to potential collaborators and funders the benefits of such a survey, particularly for environmental base lines, agricultural management and public health considerations, as well as for mineral exploration and downstream geological and geochemical research. 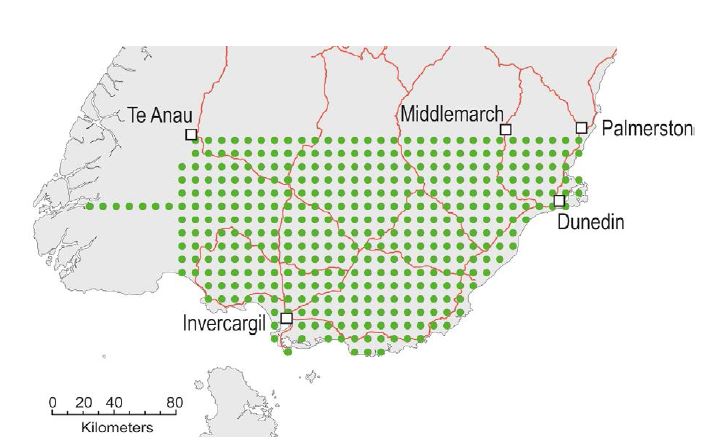 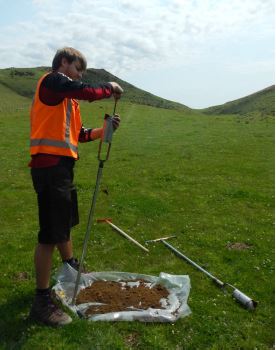