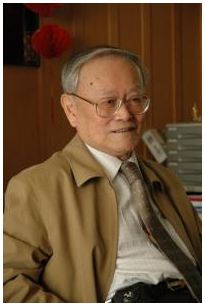 On Friday February 24, 2017 we lost an outstanding geochemist, the Chinese “father of exploration geochemistry”, and one of the pioneers of global geochemical mapping: Professor Xie Xuejing. He peacefully passed away accompanied by his children, his students and colleagues at a hospital in Beijing, China.

From November of 1949 to January of 1953, he worked as a geoanalyst in the Chemical Laboratory of Nanjing Mineral Exploration Bureau. From February of 1953 to January of 1957, he served as a junior researcher at the Geochemical Prospecting Division of Ministry of Geology. From February 1957 to now, he worked as a geochemist, senior geochemist, director of the Exploration Geochemistry Division, vice director the Institute of Geophysical and Geochemical Exploration (IGGE), Chinese Academy of Geological Sciences. He was elected as an academician of the Chinese Academy of Sciences in 1980 and served as the Honorable Director of the IGGE since 1983. He was a member of the Association of Applied Geochemists and chairperson of Chinese Association of Exploration Geochemistry.

Professor Xie was the founder of exploration geochemistry in China. He conducted the first geochemical exploration activity in China in Anhui Province with the systematic sampling and chemical analysis of rocks, soils, stream sediments, and plants in the search for copper deposits in 1951. In the late 1950s, he studied element zonation in primary halos during which he developed methods that were widely applied in geochemical exploration for mineral deposits in China. In the 1970s, Professor Xie initiated and designed the China Regional Geochemistry - National Reconnaissance (RGNR) Project, also known as the China National Geochemical Mapping Project. Over the past nearly 40 years, the project has covered more than seven million square kilometers. This project has led to China having the most remarkable national geochemical database in the world and led to discoveries of about 2500 mineral ore deposits up to now. The most exciting of these is its contribution to discovery of the total reserve of 4000 tons of gold.

Professor Xie devoted his research to the systematics of geochemical mapping, including the studies of cell sampling methodology, reference materials, laboratory chemical analysis and quality control etc. This research has made great contribution to China’s high-quality geochemical data and atlas based on the 30-year sampling campaign and more than 30 laboratories' sample analyses.

Professor Xie was one of the pioneers of global geochemical mapping. He was one of the initiators for IGCP 259 and IGCP 360. Prof. Xie played an important role in designing the protocols for international geochemical mapping as a member of the steering committee for IGCP 259 and IGCP 360. He conducted the Environmental Geochemical Monitoring Network (EGMON) project in China as a pilot study of the Global Geochemical Mapping Project from 1993 to 1996. His idea of floodplain sediment sampling was put forward in this project. A total of 520 floodplain sediment samples were used to cover most of China with the similar general geochemical overview compared based on the high density stream sediment sampling data of the RGNR. In order to meet the chemical analytical requirements of IGCP 259/360 recommendations, Professor Xie proposed to composite samples from the RGNR samples (25 samples covering 100 km2 were composited into 1 sample) for chemical analysis of 76 elements (71 elements as recommended by IGCP 259 plus Os, Ir, Ru, Rh and Re) in 2000. This project has promoted the development of a 76-element laboratory analytical technology. This project has produced 76-element geochemical atlas covering 2.5 million square kilometers of southwest and southern China from 2000 to 2010.

Professor Xie was a strategic scientist. In the late 1990s, he put forward the nation-wide Geological Survey Program which integrated investigation work and scientific study, and the Multi-purpose and Multi-scale Geochemical Mapping Project etc.

Professor Xie, as an international geochemist, initiated the establishment of international research centre on global geochemical mapping. With his active promotion, the UNESCO International Centre on Global-scale Geochemistry was officially established with the approval by the UNESCO and Chinese Government in May 2016.

Professor Xie was a fine teacher. He, as a supervisor of the Chinese Academy of Geological Sciences and an emeritus professor at Changchun College of Geology (Jilin University), China University of Geosciences (Beijing), mentored twenty MSc and PhD students who are currently taking on leadership roles in geochemical exploration, environmental, and agricultural geochemical mapping and global geochemical baselines studies. He had 180 publications both in Chinese and in English.

Professor Xie received the China Science Conference Prize in 1978, the China State Science and Technology Progress Prize in 2008, and the Gold Medal Award of Association of Applied Geochemists (AAG) in 2007 for his remarkable achievements in the field of applied geochemistry. For more information about his AAG Gold medal see this web link https://www.appliedgeochemists.org/index.php/awards/2-uncategorised/74-gold-medal-2007

Professor Xie, we will miss you enormously and we are so grateful for your long lasting legacy in exploration geochemistry and geochemical mapping.

Institute of Geophysical and Geochemical Exploration