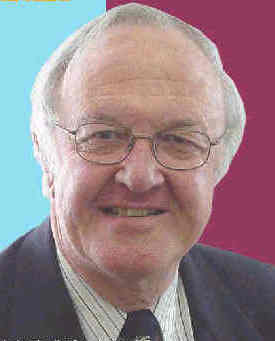 Ian Nichol was born in Newcastle-on-Tyne, grew up in Berwick-on-Tweed, and was educated in Northumbria, UK, his interest in geology naturally led him to the University of Durham. He graduated with a BSc in 1956, and immediately left for Queen’s University, Kingston, where he started what was to be a lifelong association with Canada and Queen’s. His MA research was on the trace element chemistry of sulphide minerals, Trace element study of contemporaneous sulphides, pyrite, pyrrhotite and chalcopyrite, under the guidance of Professor Ed Hawley. He completed this MA in 1958 and returned to Durham to undertake his PhD under the supervision of Roy Phillips, A study of some manganese minerals, which was awarded in 1962.

On completing his thesis he was recruited by Professor John Webb to join the Geochemical Prospecting Research Centre, shortly to become the Applied Geochemistry Research Group (AGRG), at Imperial College, London, in 1961. Ian immediately became immersed in regional geochemical surveys in the tropical lateritic terrains of Zambia and Sierra Leone, and by 1966 his students had completed three PhDs and one DIC (Diploma of Imperial College). During that time he started his teaching career providing a geochemical prospecting course, with Cliff James, to Mining Geology undergraduates, Mineral Exploration DIC students, and new graduate students to the AGRG, together with running the associated annual spring field camps. In 1965 AGRG interests shifted to the British Isles, and Ian’s students completed a further four PhD studies to support the interpretation of the data that would be generated from the 1969 field sampling (after Ian left for Canada ) for the Wolfson Atlas of England and Wales (1978).  Africa was not forgotten, and one more PhD study was completed in Zambia. It was during this time that Ian recognized the potential of computing to assist in data interpretation and map preparation, and supervised a further PhD and MSc on these topics. In total, Ian guided and encouraged nine successful PhD, one MSc and two DIC students during his time at Imperial.

In the late 1960s interest was expressed by the Canadian minerals industry and government agencies for more applied geochemical research to be undertaken at universities and the need for a graduate school. In 1969 Ian accepted an invitation to return to Queen’s University as an Associate Professor to set up a research group along the lines of John Webb’s AGRG.  He was to focus on developing geochemical exploration methods for the Canadian environment, generating future geochemists for employ by industry, government, and academia; the latter to carry on teaching future generations of applied geochemists. One of his first actions was to hire Bob Foster, an analytical chemist working at the AGRG, to set up a laboratory facility for the new group.  Similarly, he brought in Jan-Ola Larsson, a Swedish geochemist with experience in glacial terrains who had gained his PhD with Ian in London, and later, Alf Björklund, a Finnish geochemist, would join to group to help guide research (1971-73) on method development for glaciated terrains.

The projects that Ian’s students undertook in his early days at Queen’s were funded by the minerals industry, who had a need for geochemists to support their work, and find solutions to practical exploration problems. The focus was two-fold, firstly, in the surficial environment, investigations of geochemical dispersion in till sheets, and lake and stream sediments.  Studies were undertaken of the morphology of gold grains in glacial deposits to estimate travel distances, and for comparison, those in lateritic soils. The second focus was in bedrock environments, including studies of element dispersion and the formation of haloes in the immediate surroundings of mineral deposits, particularly volcanic massive sulphide deposits so important in Canada. The ultimate aim was to generate ‘vectors to ore’ for use in drilling programs. These themes were carried through latter projects, but with an increasing focus on gold. Behind these projects lay the work of the analytical laboratory, leading to one thesis project on analytical methodologies, and commercial laboratories that provided support. Additionally, three projects involved the evaluation of statistical tools for aiding interpretation, one leading to the development of the Q’GAS software that was used by many students in their thesis work.

As the value and quality of the work being led by Ian and his students for industry was being recognized, he was increasingly successful in raising research funds from Canadian federal and provincial government (NSERC, CIDA, OGRF, OGMCU) and international (UN) agencies. The intent of the CIDA and UN funded research projects was to train and return new geochemists to undertake mineral exploration in their own countries, these included Chile, China and Thailand.

In 1987 Ian was granted a one-year leave of absence from Queen’s and took a post with the United Nations Revolving Fund for Natural Resources Exploration (UNRFNRE) in New York.  Whenever he could, he returned to Kingston to his family and follow the progress of his students.  His work took him to Benin, Brazil, Haiti, India, Thailand and Yemen, amongst others, and a return to Sierra Leone to a field area with which he was familiar from Imperial College days. In this work the African lateritic terrain experience he had gained at Imperial College proved valuable, along with all the knowledge he had gained in the intervening twenty years. On his return to Queen’s he had gained a better understanding that both the lateritic and glacial surficial processes could easily upgrade a gold anomaly to many times its source concentration. To address these confusing results, Ian and his students would often (tediously) dissect samples into their component parts, based on grain-size, magnetic susceptibility and gravity. They would then examine each separated fraction individually to explain what how false anomalies differed from legitimate anomalies.

Over the years Ian organized a number of well-attended workshops at the Donald Gordon Conference Centre at Queen’s. These were often timed to run before or after major conference events in Toronto, e.g., the Exploration ’77, ’87 and ’97 conferences, as well as the Prospector and Developers Association of Canada (PDAC) meetings (e.g., 1996, 1998, and 2000), open to industry and the Queen’s Mineral Exploration MSc. students. The speakers were both leaders and innovators, some his current and former students, who made presentations on current research topics and best practices. Notably, attendees included overseas students whose attendance was supported by international development agencies.

During his career at Queen’s Ian was made a full Professor in 1971, was Chairman of Graduate Studies from 1976 to 1985, became emeritus in 1996, and fully retired in 1999. Over his 30 years at Queen’s 35 graduate students (14 PhDs and 21 MScs) benefitted from Ian’s guidance and the opportunities he gave them. While there, Ian made sure that in addition to acquiring and generating new geochemical knowledge they also gained experience in technical writing, oral presentations, meeting deadlines and networking with the world wide community of exploration geochemists. He was able to keep graduate students focused on their project objectives and deliver promised results to their research sponsors on time. When short course participants are added to this number, the impact of Ian’s contributions to developing geochemical methods and imparting that knowledge to the wider geochemical and mineral exploration community is as significant as any in the 20th century. In essence, he brought together students from around the world to his ‘incubator’ where he helped them develop their potential as exploration geochemists.

The Association of Exploration Geochemists (AEG) was formed in 1970 at the International Geochemical Exploration Symposium in Toronto. Ian was a founding member and the Association’s Secretary for its first two years and remained on Council until 1975, being President for 1973-74. Subsequently he served on a number of its committees. The Association founded the Journal of Geochemical Exploration (JGE) with Elsevier Scientific in 1972. In 1976 he joined the Editorial Board and served there until 1978 when he became an Associate Editor until 1983, and returned to the Board until 1995. The majority of the papers he co-authored with his students where published in the JGE, of the 17 papers listed on his Queen’s ResearchGate page, all but one were published in its pages. A thread that runs from his MA, through his PhD, and the topics he guided students through was the importance of understanding the trace element compositions in minerals in relation to the ore deposits with which they were associated. When the AEG founded its Distinguished Lecturer series in 1984, Ian was the first to take on this role for 1985-86. Ian was elected an Honorary Member of the Association in 2005, and the citation states, ‘In recognition of a lifetime commitment to teaching, leading graduate studies, and fostering the improvement of the application of geochemistry in mineral resource exploration’.

Ian Nichol’s greatest contribution to exploration and applied geochemistry were the students that passed through his hands, who he encouraged, supported and then graduated into professional careers. Some remained as working geochemists, some took on management roles where their geochemical knowledge helped fashion exploration strategies and research programs, both in industry and government. Some entered academia, or became involved in providing continuing education opportunities, where they carried on Ian’s work of supporting the next generation of exploration and applied geochemists – Ian was particularly gratified to see that.